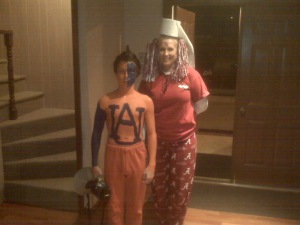 We had tons of students come out for our CBSM Iron Bowl Event.  Auburn fans sat on one side, Alabama fans sat on the other.  They also coerced (and probably forced) other fans (Tennessee, Georgia, Florida, and other stinky teams) to sit on their side.  So we judged them on who had the most on their side (Alabama won that).  Then we judged which side came dressed-up the most for their team (Alabama won that).  Then we judged which team had the craziest fanatic dressed up for their team (Auburn won that – see pic above).  It was definitely the first time I have EVER had a student come to church with no shirt on!  At a boy, Seth.   Then we had a QB competition (since both Bama’s and Auburn’s QBs are horrendous).  We put a girl from each team up in the balcony, and a guy from each team on the stage.  We let them battle it out, and the Auburn tigers tore it up putting them over the edge and securing their victory for the 2009 CBSM Iron Bowl.  So a shoutout and huge props to my Auburn Tiger students who straight up represented last night!!!