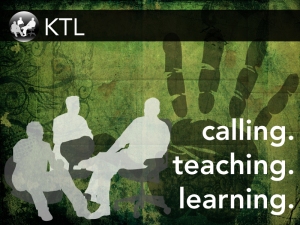 KTL is our team of 11 guy students in our ministry who either believe they are called to the ministry and desire training, or they are not sure if God has called them to ministry but they desire to be trained in the meantime.  Out of the 11 guys, we had 4 (2 seniors and 2 juniors) who had the opportunity to preach through Judges in April for the entire student ministry.  The other 7 are getting their opportunity to preach to the KTL Team over the month of May.

The students I’m highlighting this week who got to preach this last Sunday evening for our KTL Team was David Munoz (freshman) and Michael Harris (8th grader).

David Munoz is a freshman at the Sparkman 9th Grade School.  This kid is pretty special.  First of all, he comes from a GREAT family.  His parents are servants in the church, witnesses in their community, and genuine followers of Jesus.  I remember the day right after preaching my first sermon here just a year and a half ago, David’s dad came up to me and told me that David could basically recite the entire sermon.  I then made a mental note that this kid loves preaching…and is probably gifted to do so.  Well, a year and a half later, David proved me right.  A few months ago, David wrote out his sermon and posted it to his blog (www.davidmunoz.wordpress.com).  While reading it at midnight, David had me laughing out loud, in suspense while reading, and beaming at the end because of how proud of him I was for working so hard to communicate the Word of Christ.  When he preached this last Sunday night, he had us laughing, he had us grunting in agreement, and he clearly challenged us to live for Jesus.  I’ve attached the mp3 of his sermon above.  But I must say, David is not just some super spiritual giant alone.  He was also the MVP of his soccer team this year, he’s a rocking guitarist (both electric and bass), and he’s just a super cool guy to hang around.  And what I love most about him…he doesn’t graduate for another 3 years!

Michael Harris is an 8th grader at Monrovia Middle School.  Michael is also a very special teen.  And I don’t mean special ed!  What I noticed immediately from Michael is that this kid is a real, true, sincere, and deep young man of God.  If you could just hear this kid pray…you’d be convicted!  He prays to God in such a powerful way that I want HIM praying for all my requests!!  I remember a student worship night about a year ago, I had just finished preaching a message on how God raised Moses to be the leader of the Israelites and how that related to Christ as our Lord-Leader.  We must follow Christ in order to lead others in the right direction.  I gave the students much time to pray to the Lord at the end of the service with music playing softly in the background.  I remember Michael being the last one left praying his heart out.  When I went up and asked how I could pray for him, he told me that he sensed God might be calling him to be a pastor.  “As a 7th grader?”, I thought to myself.  Most 7th graders just sense the new video game release, the new hair growing on their body, and the new pimple that popped up the night before!  But THIS GUY is sensing God’s leading to be a pastor?!  Needless to say…I was amazed at what God was doing in his life!  And to be honest, I haven’t doubted Michael’s sincerity once since then.  Michael has grown as a theologian as we study the Word, as a servant as we work hard in the ministry, and as a faithful Christian as we seek opportunities to worship Jesus.  When Michael preached this last Sunday, I could automatically tell that this guy was going to be one of our deepest preachers coming up the ranks.  He preached on how Samson repented of his sin and destroyed the enemies of God…and how we must do the same through Christ.  Can 5% of 7th graders even define the word repentance?!  His sermon was incredible.  I’ve attached the mp3 above.  Michael is not just a budding theologian and future preaching phenom, but he’s also such a humble servant in our student ministry, an awesome saxophone player, and such a great guy to get into a conversation with about the Lord…and anything else.  And what I love most about him…he doesn’t graduate for another 4 years!