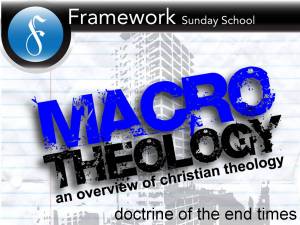 Right now our church is working on a revival in November.  We as a church staff have gotten together and made plans, we’ve called the evangelist who’s coming, we’re talking to schools in the area to get him in, etc.  Notice how we first wanted to have a revival here, then next we put plans in place to have it.  From before the beginning of creation, God’s first thought was how He wanted all eternity to look, and then He put His plans in place to make it happen.  Eternity isn’t just the last thing on God’s list, but it was the very first thing on His mind.

Your view of eternity is crucially important to your faith, your life, and your hope.  Here is what some others have believed throughout history concerning eternity.

Atheism – There is no life after death since there is no God, devil, heaven, or hell.

Buddhism – Eternity is the state of nirvana in which a person attains to absolute nothingness.

Mormonism – Eternity is a very physical hope in which many gain their own planets to rule over.

What has shaped your view of eternity: movies, country songs, Christian cartoons?  For many, old Christian hymns have shaped the way they’re excited to fly away, stare into a blinding light, sing for all eternity, and see all their family…along with Jesus.  Let’s allow Scripture to shape our minds into what God desires for all eternity.  So, what will happen before eternity?

I’m not a big fan of timelines, charts and graphs on eternity.  But here’s how it seems it will all play out.  Revelation and Daniel aren’t the only two books in the Bible talking about eternity, but God’s aim of eternity is on every page.  From the very beginning God created a kingdom on earth with Adam as a lord over it (Gen 1:28), but Adam rebelled against his Creator and brought a curse on himself, all of his descendants, and all creation.  The doctrine of the end times is simply the study of how God is reversing that evil curse on His creation.

The end times (last days) began at the resurrection of Jesus (Acts 2:17).  That decisive defeat of Satan began the presence of the church of Jesus and the Satanic opposition on the church called tribulation.  Tribulation (persecution) on Christians will escalate from the death of Christ until the coming of Christ.  The Great Tribulation spoken of in Scripture is the final stage of Christian persecution on earth.  This is when the Antichrist appears to deceive the world away from Christ to follow him.  John says the spirit of antichrist is already present and many antichrists are among us as they hate the things of Jesus (1 John 2).  Christians won’t be present for that, right?  I’m not so sure.  From what I see in Scripture, the rapture doesn’t happen until after the tribulation.  The rapture is more spoken of as a public pronouncement of the inaugural rule of Christ where He powerfully returns to reign on earth (1 Thess 4).  The rapture doesn’t seem to be some secret event where everyone comes up missing, rather a visible and shocking event where the people of God go to meet Christ in the air and immediately usher their King back to His Kingdom, the earth.  Jesus’ 1,000 year reign will then begin where He is ruling over His people but also in the presence of His enemies (Psalm 23, 110).  At the end of this millennial reign, Satan will take one last stab at destroying Jesus but he Himself will be cast into the flaming wrath of God for all eternity.  Then the eternal kingdom of Christ begins on a physical renewed earth, like a physical city, filled with physical-human citizens who are eternally cultivating a tangible culture, for the physical and touchable Lord Jesus Christ who reigns in skin as a human being forever and ever (Isa 60, Isa 65, Rom 8, 2 Pet 3, Rev 21-22).

Understanding the doctrine of the end times should totally revamp our lives in the way that we witness because we know the terror of the Lord coming for unbelievers.  It should deepen our worship of Christ as we understand more about our loyalty to Him for all eternity.  Whatever we view as the first thought of God will shape the way we live our lives.  God is thinking…Jesus!