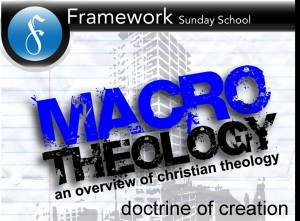 What do you think is the most beautiful, incredible, and amazing scene in creation that you’ve personally laid your eyes on?  For me it was most likely Jamaica.  The green mountains, the clear-blue Caribbean Sea, and the glowing waters at night (you’ll have to ask me about this one!) truly displayed the glory of God in His creation and handiwork.  But then again I’ve been to Mexico.  This is a place that is very dirty and dry with a bland scenery.  So when we think about God creating all things, which scenery do you think about?  Does one glorify God over the other?  Is one a more clear and vivid display of His majesty?  How should we view creation?

Since this is only one short study on the entire doctrine of creation, I must be brief.  Let’s start at the beginning of the doctrine.  First of all, where did everything (all of creation) come from?  Evolution says that all existing matter stems from an accidental explosion.  The naturalist philosophers guess that creation (nature) is eternal…so it has always existed and it will always exist.  Buddhists come down to the conclusion that it really doesn’t matter where matter comes from because it’s only the “spiritual” (immaterial) that matters.  Oddly enough, that thought is probably one of the most popular among American teenagers today.  They really don’t want to get hung up on the past; they want to think more about the present.  Christianity would answer that “WHERE did creation come from” is the wrong question.  Rather, we should be asking, “Who did creation come from?”  And of course that answer would be…God, the Creator.

Secondly, the doctrine answers, “When did God create everything?”  Our evolutionist friends have put their theoretic heads together to come up with…billions of years ago.  Our Christian friends who believe an “Old Earth Creationist” view would say that God created everything a loooong time ago and creation may have taken millions of years or more to come to be what we know it as today.  “Young Earth Creationists” see the language of Genesis as very literal and would surmise that God created everything somewhere between six and ten thousand years ago.  As a side note let me say…I have very many friends who believe in an old earth creation view.  They are godly, love Christ, respect the Bible as literal, and evangelistic.  I don’t agree with them based on biblical summary statements such as Exodus 20:11 where Moses restates that God created the earth in six days; therefore, I’m a young earther.

Personally, the next question answered by the doctrine of creation is even more interesting to me…“How did God create everything?”  Do you think it is significant that God didn’t blink, twitch, or wave His hand for everything to come into existence?  Is it important to know that God spoke everything into existence…that He did it by His Word?  I think so!

Lastly, I think this coming question is the most important and quite possibly the most neglected question when it comes to the doctrine of creation.  And honestly, if it’s not neglected, then it can often be answered incorrectly.  “Why did God create everything?”  Believe it or not, this question stems back to how God created everything…by His Word.  The phrase “and God said” is recorded nine times in Genesis 1 alone.  In Genesis 1 God said who everything came from (Him), what He created (everything), how He created it (speaking), and how long it took Him (6 days).  But Genesis 1 doesn’t tell us WHY God created everything.  That is something that isn’t specifically answered until the New Testament in passages like John 1 and Colossians 1.  They specifically say that everything was created through Christ (Who is called God’s Word), and for Christ (John 1:1-3, Colossians 1:15-18).  Why would God decide to make everything, put it under man’s feet to rule over, allow Satan to corrupt it, send Christ to die for it, and plan to renew it?  John and Paul say that it’s because God’s ultimate goal is to glorify His Son by creating everything through Him, putting everything under His feet, allowing Him to crush the head of Satan, and set Him up to rule over everything.  Therefore, the doctrine of creation gives all humanity a purpose to live, a purpose to work, and a purpose to worship Christ.